I teach Azerbaijan language and literature in school for age 11 - 17. I always join to a new project and events with my pupiles with great pleasure . STEM is one of interesting education form in modern education. İn this education form pupile must lear üith tuching and feeling. İ am an İT trainer and mentor . At the same time, I am an expert on textbook checking and language-style editor at the Ministry of Education of the Republic of Azerbaijan. I am the author of video lessons in the Video Lessons project of the Ministry of Education of the Republic of Azerbaijan and EDUMEDIA Azerbaijan joint project(www.video.edu.az) I was winner in competition " Innovative teacher " 2017 I place , Grant for Education and Innovation in Education My sites : https://steminnovruz.blogspot.com http://www.e-pedaqoq.com

Modern people celebrating Novruz – by jumping over fires, cracking eggs, trying to gain the favour of the characters Kosa (beardless), the goat, and Kechel (bald-headed) – don’t have any idea about the ancient essence of this festival. Today, people think they do this for enjoyment, but when deeply researched it becomes clear that all this is a reflex response to ancient beliefs, such as Tengrism and Shamanism. For example, a woman germinating samani, cooking Novruz sweets and cleaning, isn’t aware of any ancient mythological rituals; she is simply continuing a tradition. Although sometimes this holiday has changed its name or form of celebration, its function is still to celebrate the astronomical “new year.” Throughout history Novruz has drawn different attitudes from rulers and believers, who sometimes prohibited this holiday because they considered it beyond Islam.

But the Novruz holiday is connected with nature – it’s a holiday of nature, which is why the celebration of Novruz lasts for a month. In ancient Turkic mythology the name and divisibility of months is different. For example, there are three months in winter: the first is Boyuk Chilla (the 40 cold days of winter from its beginning until 1 February), Kichik Chilla (a 20-day period beginning from 1 February and lasting until 20 February) and Boz ay (the period of the Novruz holiday, from 21 February until 21 March). During Boz ay there are four Tuesdays: the first is called “Water Tuesday,” the second is called “Fire Tuesday,” the third is “Air Tuesday” and the last is “Earth Tuesday”. People begin to celebrate the Novruz holiday from the first Tuesday.

Based on observations of nature over long periods our ancestors divided the winter season into three parts – Boyuk chille, lasting 40 days; Kichik chille, lasting 20 days; and Boz ay, lasting 30 days. People refer to the three Tuesdays covering Kichik chille as “Ogru charshanba” (“Thief Tuesdays” orogru usku, ogru bug) and the four Tuesdays covering Boz ay as Dogru charshanba (“Right Tuesdays” or dogru usku, dogru bug). These names relate to the changes in nature happening on the eve of spring and the ancient beliefs formed in relation to them.

According to those beliefs, on “Thief Tuesdays,” coinciding with Kichik chille, the breath of spring lightly touches the air, water, soil, and trees and secretly returns to the earth. However, on “Right Tuesdays” the breath of spring soaks the air, water, trees and soil and wakes them up. On the first of these Tuesdays water is said to “get its way” (or “emerge from the chille”), meaning that water no longer freezes, that the frost and winter no longer hold sway. On the second Tuesday, plants emerge, the soil melts the ice and snow and begins to sprout seeds, rousing the plants with its breath and steam. On the third Tuesday, trees emerge and buds slowly begin to appear. Finally, on the last Tuesday, the breath of spring stirs living creatures, warming the blood of animals, birds and humans. Nature completely comes to life and begins a new flow.

Today this process is celebrated as Water, Fire, Wind and Earth Tuesdays, which are accompanied by many ceremonies, games and rituals. According to some researchers, naming Tuesdays in this way is linked to the four elements that govern life: water, fire (the sun), wind (the air) and earth. However, others believe there are five elements rather than four and that the fifth is iron, which is sent from heaven unlike the other four which originate on earth. 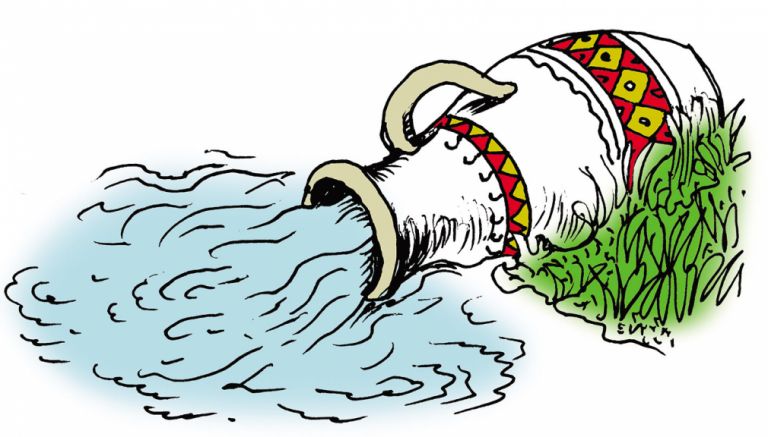 The first Tuesday, called Water Tuesday, is also known in various regions of Azerbaijan as First Tuesday, Novruz of Waters, Small Tuesday, False Tuesday and Dust Tuesday. Each of these has its own meaning and rituals. It is called First Tuesday because it is the first of the Right Tuesdays andFalse because summer is still a long way off and can’t yet be felt. Dust Tuesday refers to the fact that people would clean their houses, clothes and carpets of dust, whilst Small Tuesday reflects that this Tuesday isn’t celebrated as much as the others.

On this Tuesday, a bonfire is constructed in yards and squares and people jump over it to cleanse themselves of all the pain, hardship and distress of the last year. In the morning people go to sources of water, such as rivers, jump over them and perform various rituals. Fresh water is thought to be medicinal and protect from diseases. People also believe that the prophet Khizir found the “water of eternal life” and that Koroghlu found the Goshabulaq spring on the First Tuesday, which offer power and strength. 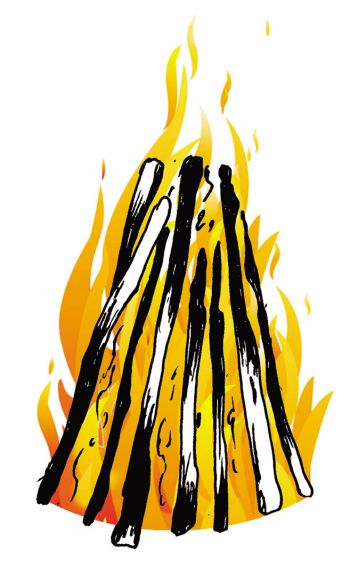 The second Tuesday is Fire Tuesday. It is known in the various regions of Azerbaijan asMujdaveran, Mujdachi or Mushtuluglu (Herald), Kule or Kul (Ash) and Xəbərçi (Messenger). On this day people begin to feel the breath of spring, the warmer weather and start to think about the garden and planting. Ash is taken from fires made that evening and sprinkled in the garden while it is still hot, over areas to be used for planting, to wake them up. In so doing people create a symbol of warmth and express their wish for the soil to emerge from hibernation.

People believe that the sun (or fire) is a symbol of life, creation, wealth, power, strength, light and glory. Fire is also thought to heal illnesses, drive away evil forces and ease hardship, which meant people used to perceive it as a gift from God and worshipped it. According to some, on the territory of Azerbaijan in the distant past the holidays of Sadda and Azarkan in honour of the sun (fire) were celebrated 50 days before Novruz with celebrations of the fires burning in temples and hearths. In those times it was traditional to make sacrifices to the sun early on the morning of Fire Tuesday. Some say that the sacrifices were brown horses, believing that this brought happiness and good fortune. 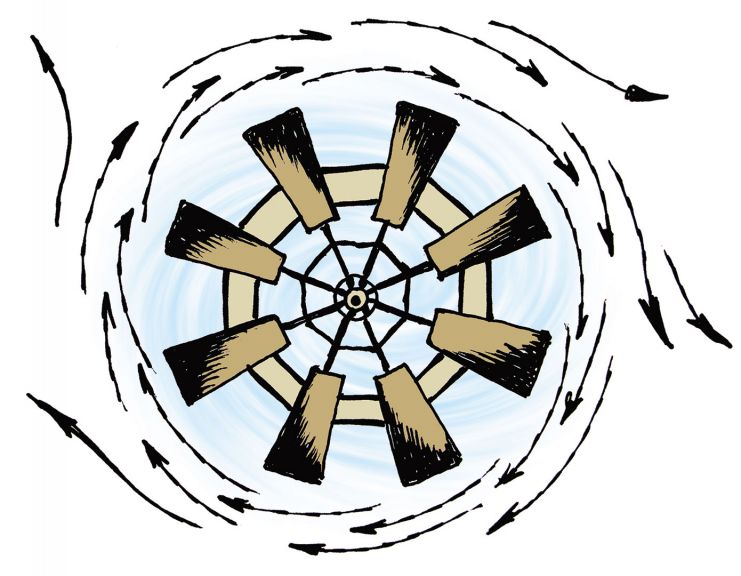 The third Tuesday is called Wind Tuesday, Windy Tuesday or Breezy Tuesday. On this Tuesday the soil and earth were believed to warm up and flowers to raise their heads. The cold and warm winds blowing on Wind Tuesday signal the coming spring; the slumbering wind has woken up, starts blowing and stirs water and fire. The changing nature of the wind during the day is perceived as the wind cleansing itself.

People also refer to Wind Tuesday as Fathers’ Tuesday, Ancestors’ Tuesday or Black Tuesday. During this evening everyone, including those living in other cities and regions, return to their home village or town to visit the graves of their relatives and loved ones. There they say prayers for them and place flaming torches on their graves. A traditional khoncha (a large tray of sweets such as gogal, shakarbura and baklava, as well as nuts, eggs and candles) is also prepared and placed on the graves. 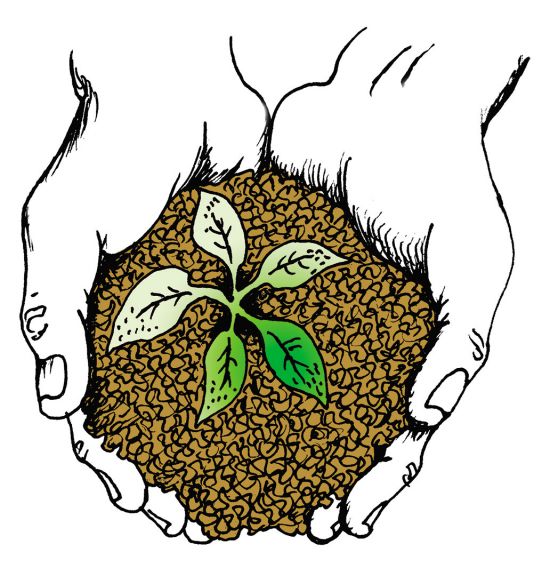 The last of the Right Tuesdays is Earth Tuesday, mostly celebrated as the Last Tuesday or the End-of-year Tuesday in the various regions of Azerbaijan. The process of waking up, revival and coming to life that started a month before is thought to culminate on Earth Tuesday.

The Last Tuesday differs from others in its importance and grandeur. This Tuesday is not just a holiday, but also Azerbaijanis’ favourite and most sacred day of the year, when they demonstrate the best of their characteristics – benevolence, hospitality, humanity and others. On this Tuesday fires are made like on all the others and the Tuesday khoncha is prepared. Ceremonies, games and entertainment are performed to ease and cleanse and provide the psychological and aesthetic foundation for a new spirit in the new year.

All family members, regardless of where they live and the distance between them gather at the family home and celebrate the holiday together. As a sign of this unity and solidarity, in every house candles should be lit for every family member. Everyone chooses a candle and makes a wish and whoever’s candle burns longest will have their wish come true.

The Last Tuesday feast is also very rich. In some regions of Azerbaijan it is called Loyun, Lavin, Yeddiloyun, Yeddilavin and sometimes Yeddisin (meaning “Types” and “Seven types” respectively). The names are significant – people believe there should be seven boons (goods) on the Last Tuesday table and their names should all begin with the letter “S” in Azerbaijani: for example, water (su), wheat shoots (samani), ears of wheat (sunbul), sumac (sumag), onion (sogan), garlic (sarimsag) and sulag.

On the night of the Last Tuesday sacks of wheat and flour and other food containers are left open. According to tradition, goods are distributed during the night and if the sacks are closed then people may not receive their share. Families make fires and add rue (uzarlik) and thorn bushes to the wood to ward off evil forces – guardians and protectors of winter, the cold and frost that will try to extinguish the fire and prevent the revival of nature.

Jumping over fire is a feature of this Tuesday too, only it isn’t just performed by people but by cattle and sheep as well, in order to rid them of hardship from the old year. The abundant feast is also purified on the fire and marriageable girls perceive the Last Tuesday fire as a magical force granting good fortune, which is reflected in the song they sing when jumping over it:

Let my difficulties go away,

Let them burn in the fire,

The ash from the Last Tuesday fire is sprinkled over the four corners of the house to attract abundance and drive away evil spirits.

STEM is reflected in nature. Since Novruz is a holiday of nature, we can easily perform the STEM study. The trace of any science can be found on this holiday. For example: astronomy, history, geography, chemistry, physics, agronomy and so on.

One of the main elements of Novruz is the musical composition. How does the sound waves propagate? It is important to know the physics in order to investigate it

We need to know biology and chemistry in order to prepare the composition of sweets made in Novruz. It is necessary to properly prepare the ingredients to ensure that these foods do not harm our health and the delicious taste of sweets. Be healthy! 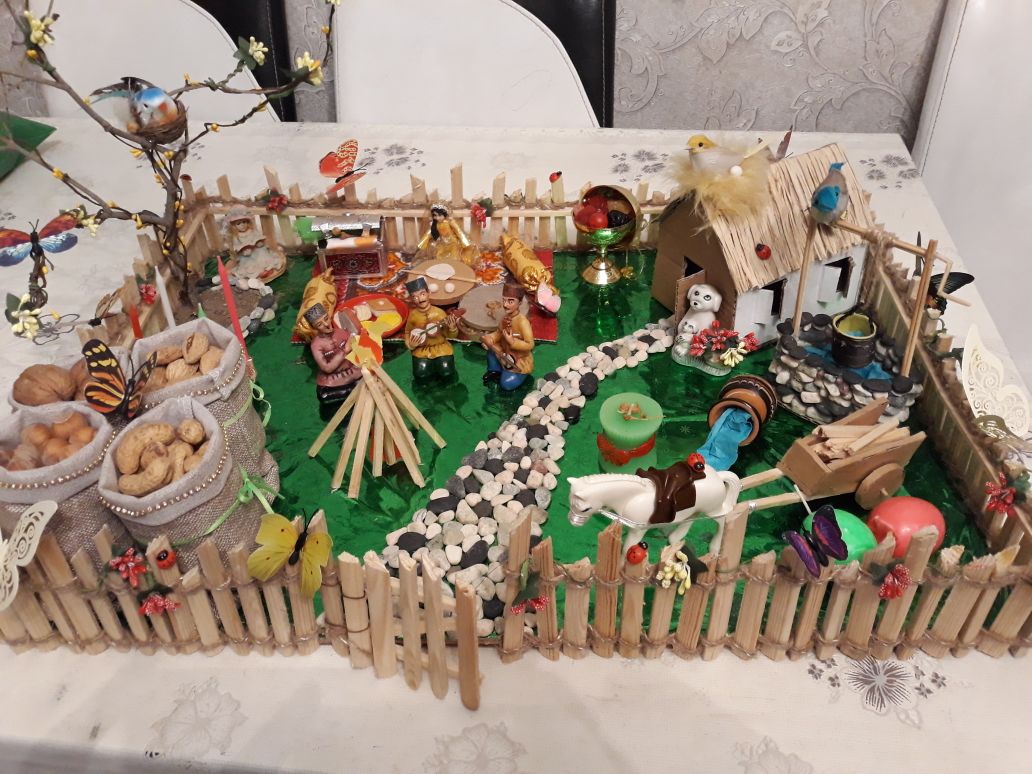 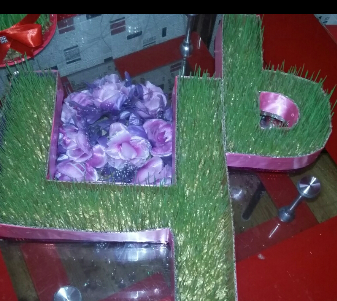 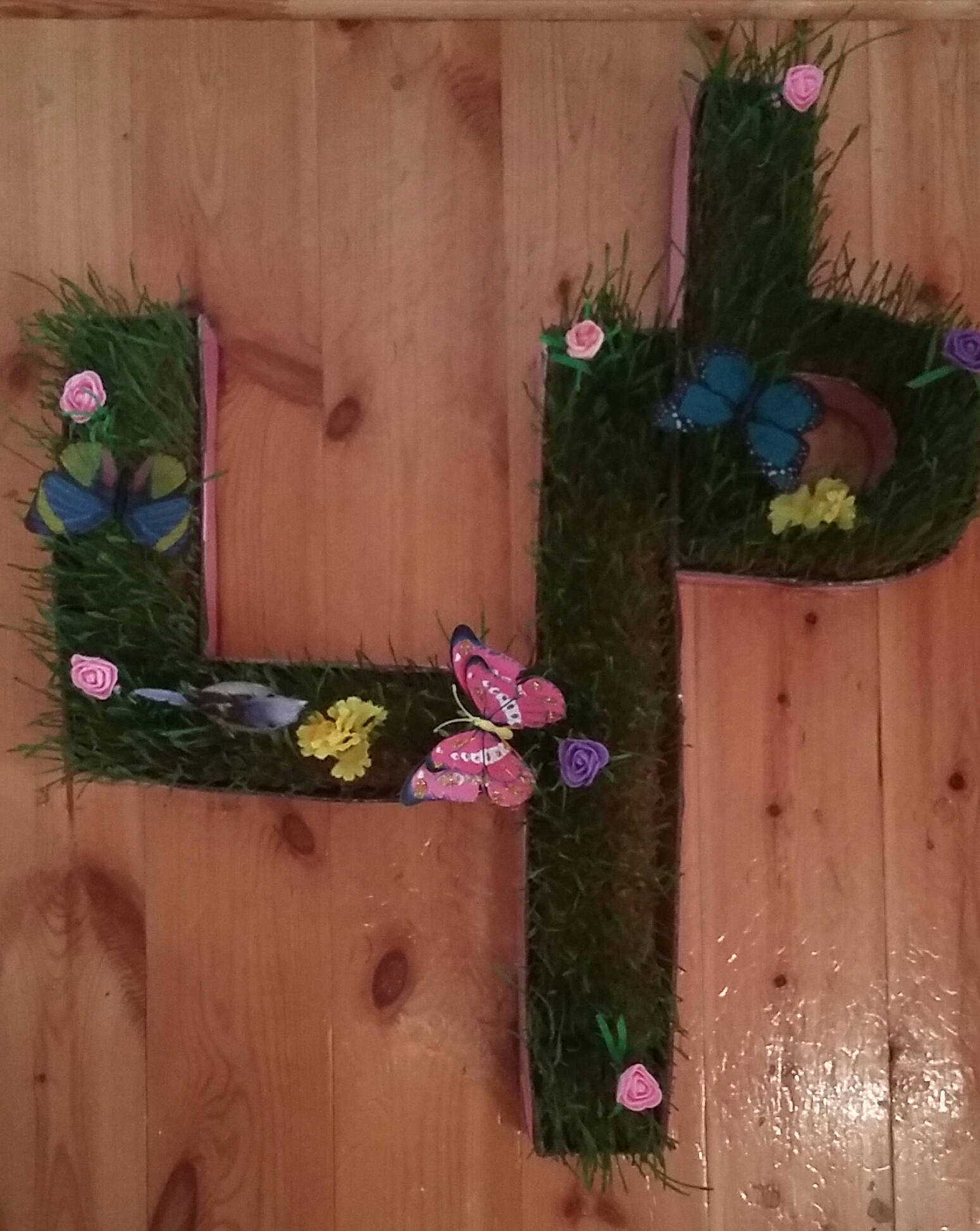