Main objective was to satisfy natural children’s curiosity, which manifests itself by asking questions and looking for answers, providing  resources to students so they could experiment, observe and conclude, leading them to answer specific question „Where does rain come from?“.

Being a little scientists, students were getting knowledge about:

Towards Earth Day students were given picture book collection about protecting our evironment. Among the picture books, the one that cought students attention was „Penguins are losing their home“, especially the part about melting ice. They started asking questions like: „Can penguins make more ice? Where will all the water go when ice melts?“. This is why  our first activities were freezing water, letting the ice melt and boiling water in a water kettle to observe how water changes from one state of matter to another.  Then we explored if the water level will rise when we put ice in it, and will it stay the same when  ice melts. We used markers on a jar to mark levels of : water, water with ice and water after melting ice. Students noticed that the water level rose after they put the ice in it, but it has stayed the same when the ice melted. During our observations of the water levels I asked students if they could tell me what is the ice like. One of the students said that it is shaped like a dice. I saw it as an opportunity for a new experiment. We took  several differently shaped plastic cups and one plastic bag, filled it with water and put it in a freezer. Next day we took them out and concluded that both water and ice take shape of the objects they are in. 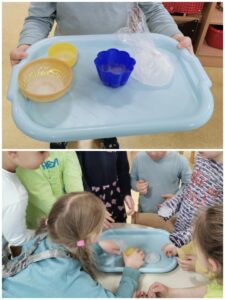 -observing the shape of ice

Now it was time for the next step of learning about states of matter by observing water cycles:

On a bag we have drown a water cycle, than we poured water in the bag, added few drops of blue food coloring and taped it on a window.

We have drown water, sun and clouds. Then we mixed ¼ cup of water with few drops of food coloring and poured it into the bottle. We placed it by the window on a sunny area.

Both observations gave students opportunity to see the water from the bottom evaporating, condensing, falling down like precipitation and collecting again at the bottom.

In the middle of a large bowl we have put a mug, than filled the bowl with water about 2/3 of the way up the cup (not inside the cup), covered the bowl with saran wrap and tied it up with a string. We placed it outside in a sunny area. Students were demonstrated how the heat of the sun turned the water in the bowl to vapor (evaporation). The vapor turned back to water droplets on the saran wrap (condensation). When drops got too heavy they fell back down (precipitation) to the water in the bowl and also a mug (it was empty at the beginning of the experiment) which represents collection. 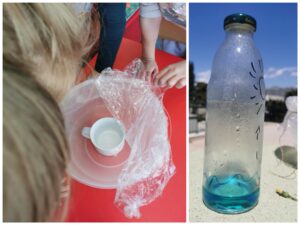 After mastering the stages of water cycle it was time to introduce clouds to students. First we read picture books about clouds. 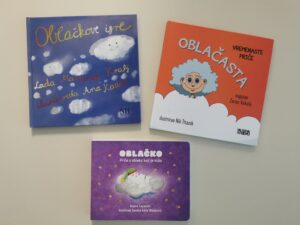 Afterwards it was time for experiments:

Jar was placed in front of a black background. We poured hot water in the jar. On the lid top of the jar we placed ice. Then we quickly removed the lid, sprayed a little bit of aerosol hairspray in the jar and placed back the lid with ice. Cloud was formed inside of the jar because  of condensation (some of the warm water turns to water vapor, it raises to the top of the jar where it comes into contact with cold air). When we moved the lid it got out. 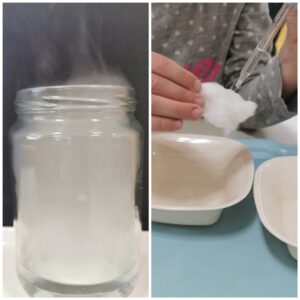 We pulled the cotton ball apart to make it have shape of a cloud. Then we slowly placed drops of water on „cloud“ using eyedropper. When our „cloud got too heavy“ it began to „rain“. It was an exaple of precipitation. At the end of the experiment we squeezed the water out of the cotton ball to see how much water clouds can collect. 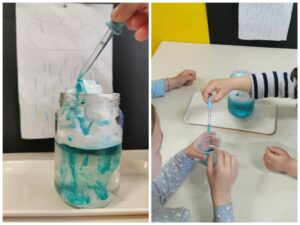 We  poured water in the jar and sprayed shaving cream on top of it. In a glass we mixed 3 spoons of water with 3 drops of blue food coloring. With an eyedropper we dropped the mixture on the shaving cream. Students were able to see that even when clouds are formed they continue to attract water droplets. Over time clouds get so full of water that they can’t hold it any more. And that is where the rain comes from.

The next step was going out on our roof terrace so we could observe clouds. I introduced students with GLOBE Observer app. To use the app we first had to learn how to use a compass. 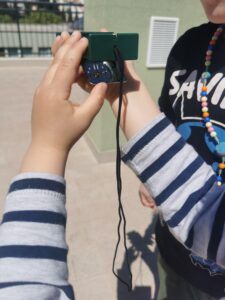 Trough these activities students practiced their skills of finding and naming sides of the world, also they noticed all kinds of cloud shapes, colours and height levels. Our final step was  taking an artistic photo of an interesting cloud and joining the STEM Discovery Campaign Competition „Look Up Cloud-Hunters“.